Faux-pas in the book

You know, you can read over the text 5 million times, yet there is always something that leaks through the cracks. "Live TV From the Moon" is no exception. Sure, typos are virtually impossible to avoid, but I did make sure that the facts always remained as such. However, on page 27, paragraph 2 I erroneously state that there were 7 manned Mercury flights, not 6!

I have no idea how that got through: I can only guess I was thinking "7 astronauts" and so 7 I wrote. As Billy Joel sang, "You're only human!"
Posted by Dwight Steven-Boniecki at 1:23 AM No comments:

Did I mention that I have low tolerance for such folk? The most recent idiotism I have read by one of them is regarding "Live TV From the Moon". Apparently because it contains "From the Moon" in the title it makes it a claptrap of government shill propaganda. Never mind that I used documents and articles from sources that have absolutely nothing to do with NASA, nor that cameras tend to work the way they are described independantly of whether NASA changes the laws of physics or not. I'm apparently the essence of evil, and all because of the racy title of my book.

On top of that if you look at youtube and the fine folk (sic) that post comments there, you still get classic questions like "who filmed Armstrong coming down the ladder?" (geeze I don't know but I suspect its the same sorry camera operator who stands behind your webcam everytime you turn it on).  Apparently, despite working in the TV industry for 20+ years, I was never made aware that a person needs to actually stand behind the camera in order for it to work. I can only imaging the closed loop circuit meltdown their brains would have if they dared look at the Sky News studios in Sydney.

Sometimes I fear my efforts in documenting how the cameras which were used on the lunar surface actually worked have come too late.
Posted by Dwight Steven-Boniecki at 2:36 AM No comments:

After getting up at 3am to have my time coincide with the fine folk over at Spacevidcast, I succesfully  albeit tiredly completed two hours of the most fun interview I have ever done.

Check it out at http://www.spacevidcast.com/

I urge you to sign up for their Epic content. They are a small outfit supplying the best space news updates in video format in the world. Their success depends on your support, and with your support they will only get better.

You know how we all complain about things today not having any passion behind them? Well the spacevidcast people have that and a whole lot more! I kid you not. I discovered them a few months back completely by accident, and it was a priveledge for me to appear on their show.
Posted by Dwight Steven-Boniecki at 10:52 PM No comments:

Ok. It is official. Thursday August 12 I will be conducting an interview with the fine people over at http://www.spacevidcast.com/ to talk about "Live TV From the Moon". Head on over to the website to get an update on when exactly, as all I know is that for me it will be 4am, but I'm over in Europe.

I have also commissioned a Hollywood prop builder to make a replica space item. I wont give away what, just yet, but it shouldn't be too hard to figure out. Stay tuned for more details!
Posted by Dwight Steven-Boniecki at 1:33 AM No comments: 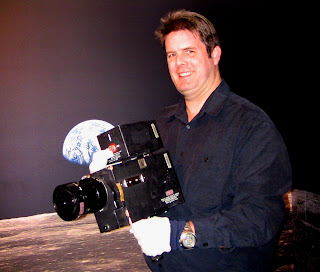 It celebrates the hard work the people behind arguably the most famous moving pictures of all time.
Posted by Dwight Steven-Boniecki at 5:17 PM No comments: 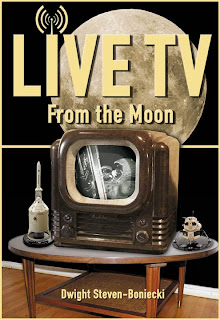 In conjunction with my book's release, I have begun a blog to keep you all updated on things related to it and the phenomenon of bringing live television from the moon to millions of households around the world.
In the meantime, head on over to Apogee books and check out their fine range of space related books, be it mission reports, biographies, or historical studies. Why not also look at my own website for the book?

cheers
Dwight
Posted by Dwight Steven-Boniecki at 10:04 PM No comments: