When I was researching "Live TV From the Moon" and "Live TV From Orbit" I spent every third or fourth day on the telephone with Stan discussing all things Apollo TV development. He was a good friend, an inspiration, and I certainly miss him. It was thanks to his enthusiasm that I ventured into research about Skylab. The Apogee books Mission Reports are a testament to this interest.

It is with a sickened heart that I see a particularly misguided dutch individual taking Stan's comments made on July 16, 2009 and spinning them to make it appear Stan was trying to blow the lid on a consiracy taking place.

Here is a response I directly addressed to the individual making the claims, and he has conveniently ignored them in an attempt to trump up his fabricated "conspiracy". I can only surmize his continued usage of his false assertions is meant only as a provocation. A provocation which is then convoluted into allegations that I am a stalker or whatever it is he feels like accusing me of this week.

Here is what Stan was concerned about. This information he openly told to the world prior to 16.7.2009, and in numerous (not one but numerous) conversations with me. He knew from Testing in Maryland that the WEC SSTV camera had decent resolution and contrast ratio. The had conducted all their tests on a vari-sync monitor which could handle the 10fps without the need for smcan conversion. The only need for that scan conversion was to make that electronic signal compatible with the NTSC standard. While WEC had developed their own scan converter, the decision was ultimately made to use the RCA built converter. This used a frame buffer disk recorder and a hi-res monitor and a TV camera. Settings like brightness, gamma, and contrast could be adjusted on the RCA unit.

When the signal first arrived once Armstrong had released the MESA, and Aldrin had put the circuit breakers in to power up the camera, you can clearly see it was correctly set, although upside down. As has been reported ad nauseum, the Goldstone scan converter operator panicked with the upside down picture, thinking the signal levels were out of whack, and proceeded to adjust them (in reality completely ruining them). If you watch the same feed as seen in Australia, this does not happen as the HSK crew had their settings correctly programmed.
What Stan was concerned about, being several hundred miles away from GDS was how the signal could look so bad, when he knew the camera had much better signal output than what he was seeing in MOCR. He was not aware (nor was anyone else at the time) what the GDS operator had done. The signal dramatically improves when the feed is changed to HSK, and further improved several minutes later when Parkes came into the signal footprint.
THAT IS SOLELY WHAT STAN IS TALKING ABOUT. NOTHING ELSE.
This is what prompted him and a group of several people, myself included, to look for the Telemetry Tapes - to see what difference those recorded TV signals may have to the scan converted archived images.
Leonov makes no mention of the camera settings. So no, he is not talking about the same thing as Stan. Had you any shred of intelligence it would have been that obvious to you from the day you watched those two seperate clips.
I am speaking from direct involvement, not extrapolating alleged wispers, whimpers or whatever the frak you think your revolutionizing the world with. I spoke directly to Stan about this. He didn't mince words and he didn't speak cryptically. That's your sole domain.

Posted by Dwight Steven-Boniecki at 6:59 PM No comments:

Those who know me, or at least know of me, should be aware that I am working on additions to the fine Apogee Books line of Mission Reports! The books contain the official NASA press kits, mission reports, and crew debriefs of each mission. They are supplemented with high quality photographs and illustrations. As is standard with all Apogee publications a bonus DVD is included with loads of goodies to complement the text.


The subsequent Skylab Missions of SL-3 and 4 are being prepared as I write this, and will include all you ever wanted to know about the post-Apollo missions on the orbital workshop. Additionally, this Skylab series will be capped of with the Apollo Soyuz Test Project Mission Reports.


Currently, Skylab 1 & 2: The NASA Mission Reports is available from www.apogeebooks.com 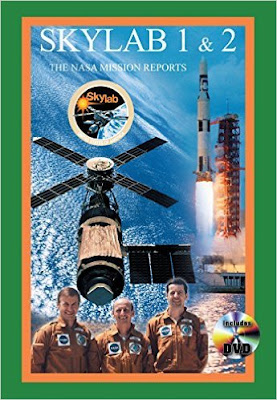 Posted by Dwight Steven-Boniecki at 6:13 AM No comments: